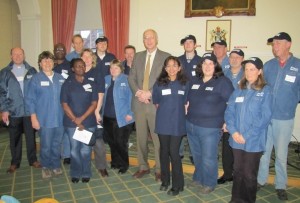 Before the ceremony began, the Street Pastor uniforms and some of the tools of the trade

(including lollipops and flip-flops) were on display for visitors to see, together with the opportunity to meet the team members. During a very uplifting and encouraging service, 16 Street Pastor volunteers from churches across Andover were handed their distinctive caps by the Town Mayor Chris Lynn and Police Inspector Ian Whyton and commissioned to ‘go’.

Later in the evening, after an initial briefing and a time of prayer, 11 of the team ‘went out’ into the town nightlife until 1 am to bring practical help and love to the Andover revellers. After a timely break, 7 of the Pastors returned to the streets to continue on until 4.00 am. We all pledged to try and speak to at least three people but we were so well received with positive comments that we probably made contact with over 100 people.

Even after just one night we all have stories that will stir your hearts, prayers to pray for the people we met there and a great big God to thank for the privilege of being in a position to be able to listen and help.

Teams of four now go out every Friday night from our base in Bridge Street Methodist Church wearing our distinctive uniforms and caps. We patrol around the numerous bars and nightclubs from 10pm until 4 am closing time. Armed with lollipos and flip-flops we are not about preaching, but offering practical help and support.

Prayer cover for the pastors is very important when we are out. We are very thankful to our team of Prayer Pastors who meet in Bridge Street whilst we walk the streets, and also for those prayer partners at home who also faithfully pray for us.