Street Pastors began in London in 2003. The founder, Reverend Les Isaac was born in Antigua in John Hughes and has many links with the island.

In 2006, on hearing about the work of Street Pastors, a delegation from Antigua visited London to explore the possibility of starting a Street Pastors Initiative in Antigua & Barbuda.

Following this visit a Street Pastors Initiative was established in Antigua & Barbuda and the first group of volunteers were commissioned and started on the streets in January 2007. There were 35 volunteers in this first group. 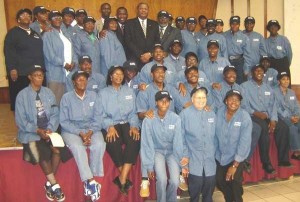 A number of this first group are still active on the streets.

Over 100 Street Pastors have been trained by the Initiative and there are now about 48 active team members.  A number of those who were trained have left Antigua and some who for various reasons are no longer able to patrol the streets have become prayer supporters.

There have been over 4,000 significant conversations on the street.

Since March 2008 the local Subway branch in St. John’s has donated a platter of Subs, a box of cookies and bottles of water every Friday night.  These are taken out onto the street and distributed to those in need.  This generous support is much appreciated by the Initiative as well as by those out on the streets.