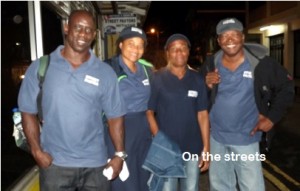 Teams of Street Pastors patrol on Friday nights from approximately 8pm to 11pm.  They usually patrol in down town St. John’s but occasionally they will visit one of the suburbs or another location on the island. 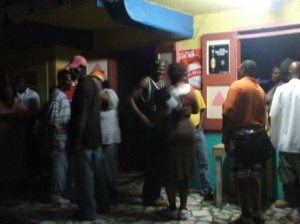 A typical bar in down town St. John’s where the Street Pastor teams regularily meet people and often have significant conversations.

The teams patrol around night clubs, bars and brothels in the down town area of St. John’s and its suburbs . Because the teams are a well known feature of the nightlife all kinds of people feel comfortable about approaching the teams and talking about all sorts of issues.

There have been over 4,000 conversations on the streets. Sometimes the conversations are very casual and insignificant but people will often share quite deep issues looking for advice and encouragement and often ask for prayer. Most of the people met are “liming” outside bars; many are lonely and dissatisfied with their lives but at a loss as to how things might change. Many have been encouraged by conversations with Street Pastors. Some who had criminal or violent intentions have been encouraged to go home peaceably.

A significant number have either been led to the Lord for a first time or helped and encouraged to rediscover their faith.

The presence of Street Pastors has a positive impact to the community, calming the atmosphere.