Thank you to Kevin 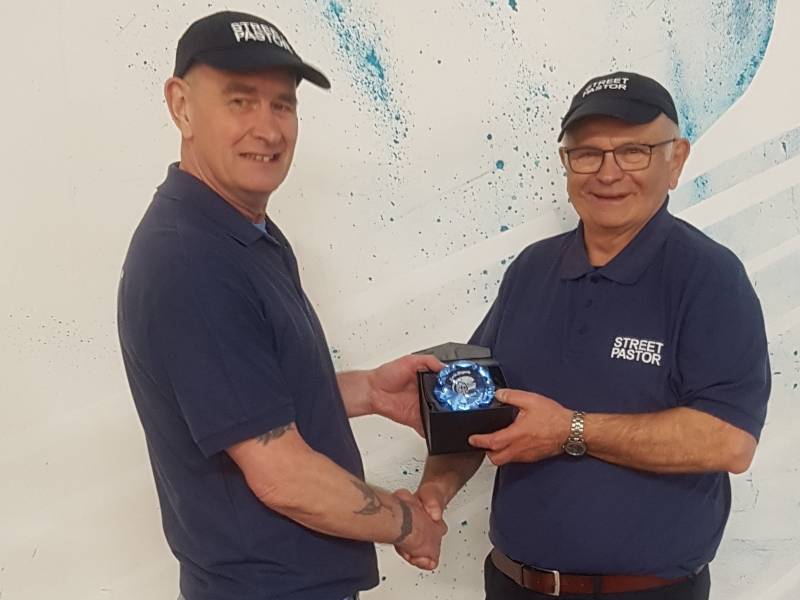 Another year of patrolling the streets of Bude on Saturday nights was celebrated by Street Pastors (SPs) at a recent AGM. The aim of SPs is to ensure that everyone out in Bude on a Saturday night has a great time while staying safe. SPs are there to encourage and help where necessary as well as ensure that the streets are safe for everyone.

Over the past 12 months, SPs were on patrol for 596 hours, picked and swept up 385 bottles and glasses, gave out 51 water bottles, 18 pairs of flip flops and 1180 lollies! The teams attended 5 more serious anti-social incidents and were on hand to administer first aid on 6 occasions. Teams are made up of volunteers from the churches in the Bude area, whose only required qualification is a smile that can last into the early hours!

PS David Flynn from Bude police station comments “For the past 8 years, the presence and influence of Bude Street Pastors has continued to grow and flourish in our town. The efforts and dedication of all those that have given their time to patrol the streets should be commended as they serve the community and help us all to be, and feel, safer in our town. Thankfully, in this time, there have only ever been a couple of occasions where they have been met with resistance and, considering the number of people they have engaged with, demonstrates the respect and admiration that the community and visitors to Bude have for them. The street pastors have directly contributed to a fall in recorded anti-social behaviour and crime in relation to the evening and night time economy and this frees up valuable police time. All the Officers working within this Policing Sector are grateful for their presence.”

At the AGM, Colin Manning (Chair) was pleased to present a service award to Kevin Hogarth (see picture) who stepped down from his role of coordinator of Bude SP teams which he has held since inception. A great deal of credit for what has been achieved to date is due to Kevin’ hard work and enthusiasm.