High Sheriff of Kent Hugo Fenwick Joins us on Patrol 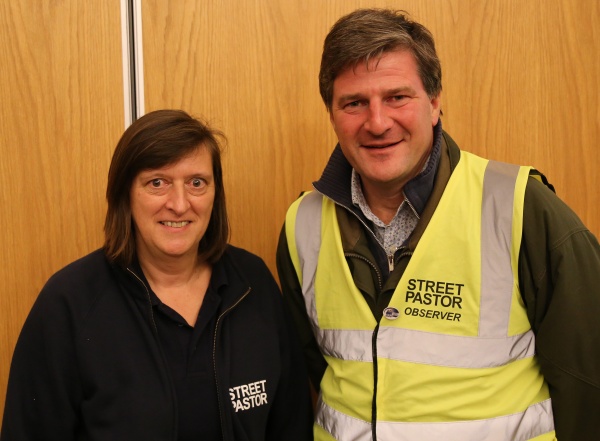 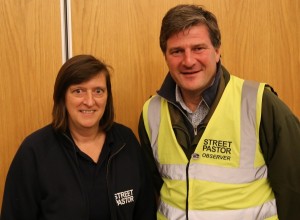 The High Sheriff of Kent, Hugo Fenwick, joined the Canterbury Street Pastors on patrol on Saturday, 1 November, to see at first hand how they help to make the city’s streets a safer place for people using them at night.

Canterbury Street Pastors Co-ordinator Lorna Bedford says: “The team really appreciated the High Sheriff’s interest in our work… and well done to him for staying for the whole shift until nearly 4am! Hugo was able to see at first hand the typical needs we encounter and the loving support we offer to Canterbury’s booming night time economy.”

Canterbury Street Pastors started in 2010 with the backing of local churches, police and Canterbury City Council.  It is part of the Street Pastors initiative established by the Ascension Trust charity. Street Pastors patrol on Saturday night between the hours of 10pm and 4am in Canterbury city centre, and in many other centres across the country on either Friday, Saturday and most Bank Holiday Sundays. They patrol in teams of three or four and carry rucksacks equipped with useful items to help people during the night such as flip flops, space blankets, water, a dustpan and brush for broken glass and a first aid kit.

Lorna adds: “Volunteers come from many different churches and do not set out to preach but to provide a Christian presence on the streets to listen, care and help. Street Pastors can help by getting someone to a place of safety, reuniting friends, offering Fist Aid, calling an ambulance, waiting with a lone individual, walking someone in the direction of home, offering a listening ear or a friendly chat. Senior police officers up and down the country have commented positively on Street Pastors. They see a reduction in crime and other incidents on nights when Street Pastors are out.

“There have been at least 44 occasions in the past nine months when we have made a significant impact to the safety and well being of an individual and have often saved an ambulance being called. Since January, we have given out over 350 pairs of flip-flops, which means 350 girls getting home without risk of injury. Street Pastors have also removed around 3,500 pieces of potentially harmful glass and tins from the streets.

Commenting on his experience, Hugo Fenwick says: “Canterbury Street Pastors are a valued part of the city. I witnessed at first-hand the respect in which they are held by young people who are out in the city’s bars and clubs on a Saturday night. It is humbling to see the sheer dedication of these volunteers out on the streets until the early hours of the morning, there to help young people when they are at their most vulnerable.”

With thanks to Martyn Barr, Impact PR & Design Limited for writing this press release