On Saturday, Chesterfield Street Pastors lent their support to a campaign being launched by Yvonne Henchcliffe in memory of her son Chris who lost his life after an incident in Chesterfield in July 2016.  The root of it all was alcohol excess and it only took one punch to take his life.

His mother Yvonne, who launched her ‘Stay Cute and Dilute’ campaign to raise awareness of alcohol-related problems in the area, said: “The problem of alcohol-fuelled violence in the area is horrendous and i 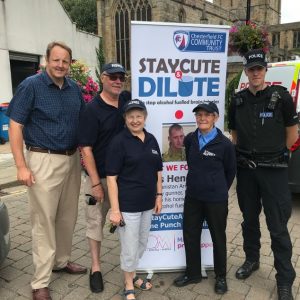 “We aren’t telling people don’t drink,” she said, “We’re just saying to take it steady and dilute in between drinks rather than pre-loading. Enjoy the night and make sure that your children come home, rather than what happened to Chris.”

Most people come into town with the intention of having a good night out with their family and friends and this campaign wants to help them to do just that.  By alternating alcoholic drinks with soft drinks or water you reduce the chance of doing something that you will regret the next day – maybe for the rest of your life.

Water will not sober you up but it will re-hydrate you which helps your body cope, means you thinking is more lucid and it helps to combat the morning after hangover.  It’s not about being a spoilsport, it’s about keeping you safe and making sure your night out in Chesterfield is a good one.