Last Saturday, our team of Street Pastors were patrolling Chesterfield town centre as usual.  For a Bank Holiday weekend it was very cold and relatively quiet so it looked as if it was going to be an uneventful evening.  They had been to base for a warming cuppa and then headed back towards town.  On the way they spotted a wallet on the floor in the church yard, complete with money, cards, driving licence etc which they picked up intending to hand it in to a police officer in town.

The only officers they saw were driving through in cars so they decided to take it down to the Police Station and hand it in.  At the Police Station they were told they no longer take in lost property.  So what could they do?  The person who had lost it would have been desperate to get it back.

The team all studied the photo of the young man from his driving licence and took a few moments to pray that God would help them to find him and reunite him with his wallet.  Scanning passers by for look-a-likes they felt the chances of finding him were slim.  Then about 15-20 mins later they saw two young men, one of whom was particularly agitated.  They were questioning a couple and it appeared that they were searching for something that was lost.  The team found out from the couple that it was a wallet they were looking for.

The Street Pastors approached the two young men and, having verified the name and date of birth from the driving licence, they were able to reunite the wallet with it’s owner.  He was elated and started leaping around and insisted on a selfie with the Street Pastors before he went on his way.

Thank you to our Father God whose kindness extends to sorting out this kind of thing too. 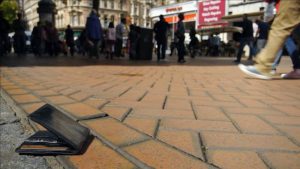