On 6th December 2016, Doncaster Street Pastors held a special service of praise and celebration for five years of ministry on the streets of central Doncaster.

The service was held at Wheatley Park Baptist Church and was led by Rev Andy West, the pastor at the church. The focus of the service was “Partnership Working”, and so we were very pleased to welcome as our guests the Civic Mayor, Councillor David Nevett, Councillor Glyn Jones, the Deputy Mayor, and members and officers of Doncaster Council, together with Temporary Chief Superintendent Scott Green from South Yorkshire Police, and representatives of the night time economy.

Pat Hagan, Head of Service, Communities at Doncaster Council and Sharon Clark, Chair of Doncaster Pubwatch read lessons and our worship was to the accompaniment of Wheatley Park Baptist Church worship team, which included one of our own Street Pastors

During the service, Rod Morrison, Coordinator, and Martin Wileman, Treasurer, spoke about the work and finances of Doncaster Street Pastors.

We also appointed the members of our Management Committee for the coming year, and all our volunteers recommitted themselves in prayer to this ministry.

We currently have 19 commissioned Street Pastors although because of volunteers’ employment, personal commitments and illness, only 17 are actively patrolling.

Over the five years we have been operating, we have only had to cancel two planned patrols, although in this last year we have not been able to fulfil every (increasing) request to patrol because of the drop in the number of active Street Pastors.

This is an extremely important part of the way we operate. We currently have 9 dedicated Prayer Pastors, who generally work in pairs at our base, supporting, in prayer, the team of Street Pastors for the duration of each patrol.

However, again this year we have struggled to have two on duty always, and on a number of occasions only one Prayer Pastor has been available, sometimes operating from home, which they agree is not ideal.

We desperately need more people to volunteer to be Prayer Pastors. If you think this is something you could do, please contact Don Trahearn, our Prayer Coordinator on 01302 360775 or e-mail at trahearn@yahoo.co.uk

Don will be very pleased to explain to you what being a Prayer Pastor involves.

On February 9th in the presence of The Chief Constable and the Police Crime Commissioner at Doncaster Mansion House, Councillor Ros Jones, Mayor of Doncaster presented Doncaster Street Pastors with the South Yorkshire Police Partnership Working Award for 2016. 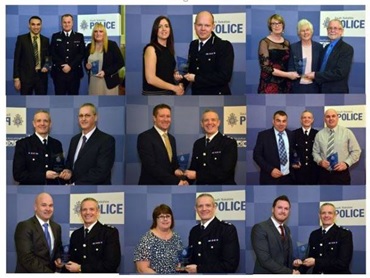 This is the second time that Doncaster Street Pastors have been given this award, the first being when we were awarded the “Partnership Working Award 2014”. Furthermore, in March 2016 we also received the High Sherriff’s award for our work in the community.

Street Pastors are now well established in Doncaster and welcomed by the public, with whom we have an excellent rapport through offering practical help to revellers and others who may otherwise be vulnerable.

We have a high level of credibility and trust, with excellent working relationships with the Police, the Health Care professionals, the teams who staff the NHS First Responder Car, the licensees and managers of the pubs and clubs, and the door security staff.

More often than not we receive a briefing from the police at our base prior to starting the night’s patrol. Our volunteers work together as a team with all those who work in the night time economy and not as an individual group in isolation.

A new initiative in partnership working that we are excited about is the Doncaster Safe Haven which has been set up by Andy Collins, from Doncaster Council’s Public Health team.

The Drugs and Alcohol Service’s information bus is being used as a Safe Haven situated in the centre of the town during Saturday nights to which people can go or be taken for emergency medical care, for safeguarding, and for health and well-being information related to drink, drugs and sexual relationships.

It is a multi-agency venture, with NHS and other medical personnel in attendance, as well other support agencies, together with an ambulance with medical personnel, which will be able to transport people to hospital if their medical condition deteriorates whilst they are in the Safe Haven.

Street Pastors are able to take people to the Safe Haven for emergency medical care and for safe refuge for vulnerable people whilst they wait for transport home. 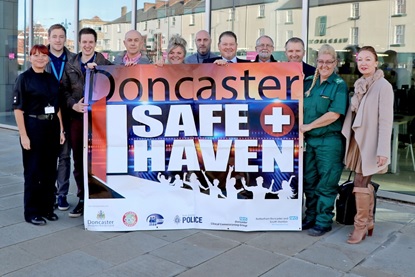 The Safe Haven launched on Saturday 10th December. Ian White and “Look North” were filming in town that night, and conducting interviews at the Safe Haven, including one with our coordinator.

The ‘South Yorkshire Response Pastor Team’ is now available for deployment in times of local or nearby disaster or crisis, possibly deploying for a day or more to meet the emotional and physical needs of those affected. This will be an ‘occasional role’ when required in addition to their regular role of Street Pastor. Response Pastors are identified by having a distinctive uniform

Response Pastors will respond when required under the direction of the national Response Pastor Co-ordinator, and be deployed in consultation with the Emergency Services and Local Emergency Planners and Responders in appropriate areas and numbers to meet the identified need.

South Yorkshire Response Pastors have been deployed once since being commissioned – to Birstall following the death of the MP Jo Cox. One of the Doncaster Street Pastors was among those deployed.

Once again Street Pastors joined with the Salvation Army band to sing carols to revellers on Saturday 17th December, reminding those out in the centre of town on that Saturday night just what Christmas is all about.

If you missed that, look out for the date for next year.

If you cannot wait until then, but would like to find out more about what we do at close hand, we are always pleased to take out observers with us. Just contact our coordinator, Rod Morrison, on 01302 530109 or e-mail him at doncaster@streetpastors.org.uk