Stories From Lock Down 5 – Brian

Brian and his wife Denise are both active Street Pastors and serve on the Management Committee of our Charity. They have a passion for caring for those in need and so going on patrol as Street Pastors brings immense satisfaction to them both.

The current lock down was a blow – it’s so frustrating when you’re aware of situations of great need but are prevented from helping out!

That’s why as a temporary measure we signposted our people to our partner organisations, one of which is Bethany Christian Trust. Brian already had some involvement with Bethany but now the need and opportunity is even greater.

Brian tells us about a recent time:

“It was very busy at the first stop at Waverly bridge, we served about 25 people. The other stops at King stables road, Grassmarket and North Bridge only had two or three people at each.  We were able to give away sandwich bags as well as the soup and rolls as these have been donated by Social Bite.  The new rules mean that we don’t have anybody outside the van so there is no real opportunity for conversation with anybody. This is disappointing, but we were still able to give away clothes, mostly done by placing them in a box on the pavement and people can help themselves.

It once again highlighted a couple of interesting points, the people we serve on the care van are far more transient than the regulars we see out on Patrol and those regulars never seem to appear at the care van!! It is almost like there are 2 entirely different groups of those who appear to have the same needs!

The streets were deserted and it seemed really strange in the Grassmarket in particular but it shows once again the deep need there still is and was once again a privilege to serve in that way.”

Brian – you and Denise are doing amazing work, well done and we look forward to you being back on patrol as Street Pastors, hopefully soon!

If you would like to know more about the work of Edinburgh Street Pastors, get involved in some way, or would just like to talk or pray with someone the please contact us at edinburgh@streetpastors.org.uk 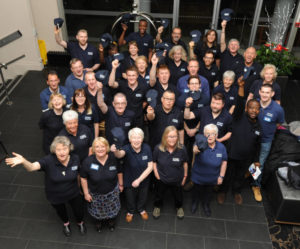