On 22nd April 2016, we were delighted to gather at Morden Baptist Church to celebrate the launch of our Morden Street Pastor Team and then send the first team out onto the streets.

It was fabulous that we were supported at the launch by local Councillors, the Police, Safer Merton, Merton Voluntary Service Council and representatives from the Churches in Merton as well as members of our team. 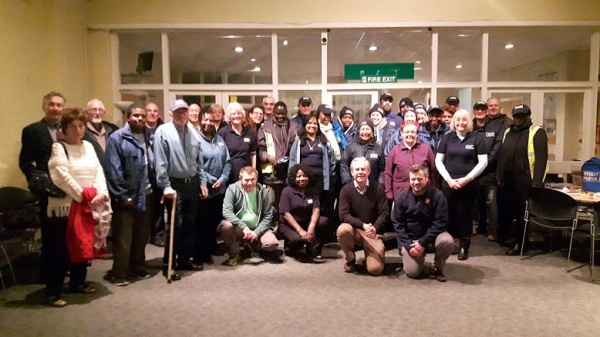 A picture of everyone who attended the launch.

The initial team going out into Morden!

We didn’t send out one, but actually three teams on that first night comprising seven women and four men along with three others who were observing to see what happens on a street pastor patrol. Six of the team had been specifically recruited to form the new Morden Street Pastor team and had undertaken initial training in March.

We are thankful to God for this new team and the way in which it came about and trust that they will be a blessing to the people they will go on to interact with in the coming weeks, months and years.

The Morden Street Pastor team story is that in 2015 we felt challenged to expand our work in Merton to build on the patrols we were already undertaking in Mitcham and Wimbledon. We applied for funding to “Expand and Strengthen” our work, receiving 80% of what we applied for. We emailed 11 Church Leaders on 22nd December inviting them to a meeting early in January to explore the possibility of putting together a Morden team. 13 people attended the subsequent meeting representing 8 different churches. One of which, Merton Vineyard, we didn’t even know existed and so hadn’t invited them. Thus, it was miraculous they attended. By the end of the meeting, it looked likely we would have 5 people who would go on to train as Street Pastors. Our coordinator usually does a lot of the recruitment work, but he took the three weeks preceding the start of the training course off following the birth of his daughter and was pleasantly surprised when he returned to find seven people were finally enrolled on the training course thanks to the hard work of the trustees. Finally, on Friday 22nd April we launched the Morden team which turned out to be exactly 4 months from when we had sent out the invitations to the initial meeting.