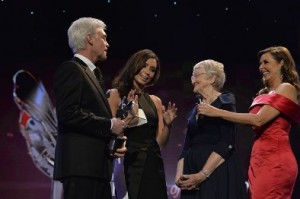 The award followed Anne winning the ITV Westcountry award and was in recognition of her work as a St Pastor, with Plymouth’s Soup Run and in Gaffers Gorge, faithfully helping to feed homeless, needy and lonely people in the city.

A string of people also testify to the fact that Anne has been an inspiration and encouragement in their personal lives e.g. while she was serving at the Soup Run one night; one man thanked her because he’d met her 4 years previously, when Anne was on St. Pastor patrol – he was thinking of committing suicide but Anne talked and prayed with him and he changed his mind!

Several videos, from Anne’s nomination film to being interviewed after receiving her award can be seen on http://www.itv.com/news/westcountry/story/2013-07-27/pride-of-britain-awards-2013/

This site uses Akismet to reduce spam. Learn how your comment data is processed.