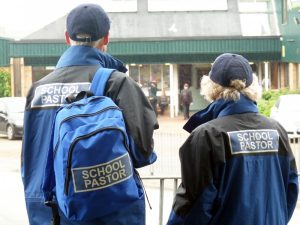 We are “delighted” to announce that our School Pastor project has now been closed – for being too successful!

Our March 2014 newsletter reads;- We are grateful to God for the tremendous difference that has been made in Plymstock since our School Pastor patrols started in 2011 and continue to be amazed that the manager of Plymstock Broadway says that in the last 3 years, anti-social behaviour has dropped by 99%, whether or not we are on patrol!

Rev Stu Clarke, our School Pastor Coordinator, says: The students at Plymstock School have responded positively to us, as have the majority of the staff. The Headteacher has always been affirmative and supportive. But we have a strong sense that ‘We have done what the Lord asked us to do’ and that Plymouth School Pastors now needs to be mothballed until the Lord opens a fresh door into another area of Plymouth with a new team serving a different school.

However, a number of the Prayer Pastors have offered to continue to pray for the centre of Plymstock, and the Centre manager has kindly offered to let them continue to use his base for their prayers.

All that really remains for me to say is a big THANK YOU for all the dedication and service and ministry of the School and Prayer Pastors. It has been an enormous pleasure and privilege serving with them, and such an unforgettable experience.

An extract from a letter we received from the Headteacher and the Chair of Governors at Plymstock School reads: We would like to thank you for the amazing support you have given the many students at Plymstock School over 3 years. Students have greatly appreciated your relentless commitment to what has been a very successful initiative. It is no exaggeration to say that the atmosphere outside the school gates on Thursdays and Fridays is now friendly and safe.

Although the team will be greatly missed, I feel that your impact will not be lost as there has been a definite change in culture brought about by your presence”

What can we say but “Thank you Lord”?