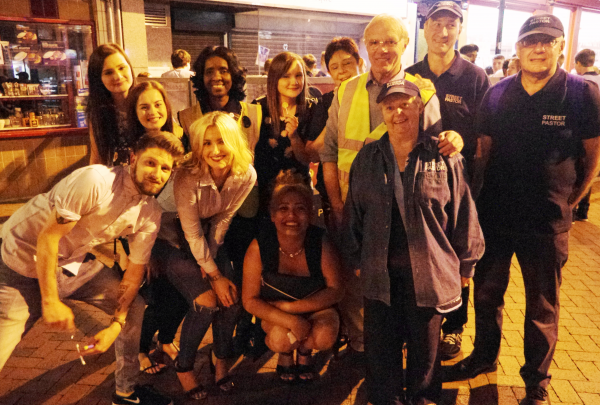 Warwickshire PCC, Ron Ball (On The right in the Yellow Jacket ), pictured with the Rugby Street Pastors and clubbers.

On Saturday July 4th, Warwickshire Police and Crime Commissioner (PCC), Ron Ball, went out on patrol with the Rugby Street Pastors. This was preceded by a tour of the Rugby First CCTV Control Room.

While on patrol, Mr Ball experienced first-hand the Rugby night time economy, including visiting night clubs and talking to the door staff and clubbers as he patrolled Rugby’s streets.

Mr Ball said “’For a good reason, Street Pastors are held in the highest regard in the communities they serve, and I share that opinion. Saturday was my fourth opportunity to witness the work they do first-hand, and it proved to be both eventful and enjoyable. Well before an ambulance arrived the Pastors were able to tend to a member of the public with basic first aid and pastoral care. It also gave me an opportunity to offer some practical help to them by way of providing some financial support. I like to describe the work they do as “lowering the temperature” in the towns in which they operate, and I’m a huge fan of the work that they do”

Before going out on patrol, Mr Ball formally presented a cheque for £5,490 to Rugby Street Pastors. The £5,490 was the second year’s funding awarded to Rugby Street Pastors and is part of a £1 million Commissioner Grant Scheme, set up by Ron, which invites bids to fund local projects that support the victims of crime, and help reduce crime and anti-social behaviour.

Pete Hickey, Rugby Street Pastor Coordinator, said “Rugby Street Pastors is delighted to have received a further years funding from the PCC fund. I would also like to thank Ron for his positive comments regarding our work and the interest he has shown by giving up his time to patrol with us. I am pleased that he found it a very positive experience.” 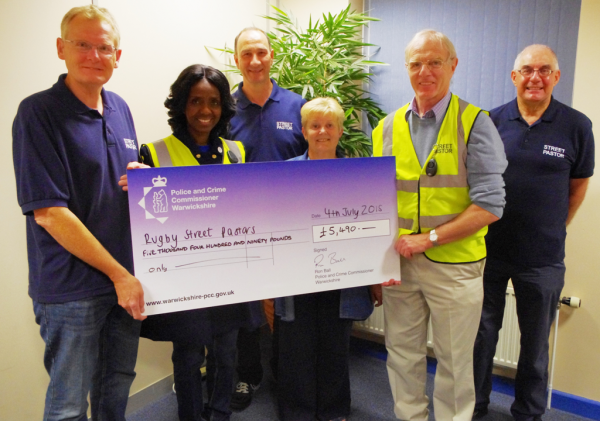 Warwickshire PCC, Ron Ball (On The right in the Yellow Jacket ), presenting the cheque to the Rugby Street Pastors.

*This  was subsequently published in the local Rugby Advertiser and Rugby Observer newspapers.