We finally made it out on to the streets of our night time economy on 23rd December 2016, the fourth Friday of the month and the night that would traditionally be called Mad Friday. 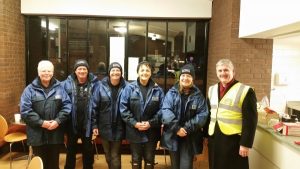 A huge thank you to the people who are supporting us along the way with prayer, we really felt the benefit of your prayers out there, donations and kind wishes. We can’t thank you enough. It really helps us to feel God’s hand in this. Liverpool Street Pastors have been so helpful in mentoring us with pretty much everything and supporting us with observation opportunities for our volunteers and we’ve also spent time with the Haydock and Warrington teams to help us prepare for this night.

We were later setting out on our first patrol, having a few tweaks to make, but the night time economy was forgiving in that things don’t start to get too busy until after our break time really. This gave us time to meet some of the doormen and takeaway workers along the main streets of St Helens, Westfield Street, Duke Street, Ormskirk Street.

People were generally very receptive to Street Pastors, many having already come across them in Liverpool and other towns and cities locally and also thanks to the publicity the local Star newspaper have given us over the past couple of weeks.

We had the opportunity to have some good conversations and start building relationships with some of the people regularly out at night and also to offer help in the form of flip flops and water to some of the people who were out enjoying themselves.

Our next patrol will be 13th January 2017, watch this space for photos of our other team members. We can’t wait to see what God has in store for us next 🙂