As we were not able to go out in August it was good to assemble in September. Athelia Rez Wayne David and Veronica met at Ramsden road and began the patrol at 11.05pm.
A few months past we had hosed a quiz night in Balham which Athelia was due to attend. While she was journeying home she observed the aftermath of an accident where a cyclist had fallen in the road. We went back to this area to pray for road safety in that area, while we were leaving that scene had to leave us as she had an early start the following morning. 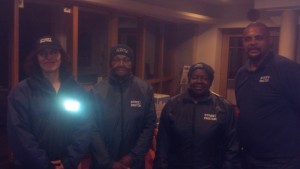 As we continued our patrol we met two young men James and Toby drinking outside a local pub. They were genuinely pleased to see us and were grateful for what we were doing. Though much of what they said was fuelled by the alcohol they had consumed they were pleased to see that someone was looking out for the vulnerable. James spoke of a difficult situation with his mother so we took this to heart and remembered him in our prayers.
As we went on we passed many of the tows night clubs they were mostly lively but not too busy. People seemed in a relaxed and happy mood but most places were half empty. We met our usual door staff who confirmed our observations.
As we moved on to the Larch close estate area on Bedford Hill we met a man named Del, He spoke with Athelia and Rez as to how peaceful the estate was nowadays, he recalls a time when alot of youths would run around late at night making alot of noise causing unrest in the estate and around the neighbouring shops. We recall the same and remembered a patrol in August a few years back where we addressed the situation first hand.
Many of our patrols of Balham have been quiet and this one was no exception but the conversations we had showed us that we are appreciated and are definitely worthwhile. We finished our patrol at approx. 01.15 on Saturday.

We collected 9 bottles and 1 glass as well as numerous cans from the street.