It was actually looking like a good weather morning but soon turned into a windy overcast one as Athelia and Wayne entered the Academy.

The Academy was offering a competition where they were giving an 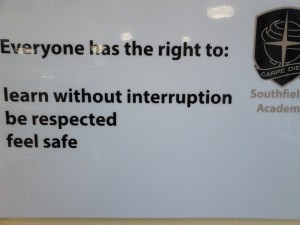 opportunity for three students to form a team to compete to see which team could name the capitals of different Countries. This was all part of International week in which the students will get a chance to sample cuisine from different nations and to experience different cultures through watching films.

As we moved around the playground we found that the usual suspects were avoiding us and many of our old friends were keen to see us. Wayne spoke to a group from Somalia as gave them soma advice for their upcoming exams next month.  Athelia was busy speaking to some Somalian girls before catching up with some Spanish friends she had spoken to before.

As we moved into the school to communicate with the students taken out of lessons we met two students. One who we did not get a chance to speak to last week and a new young boy who was a first timer. Both were reluctant to speak to us as to why they were excluded from their lessons  but we encouraged them as best we could to try harder to achieve their ambitions and to make the best of their education and the opportunity it affords them. We were also keen to stress our stance on anti-bullying and were keen to learn that there is little bullying in the Academy.

We are pleased to be in the school and to play the role we play and look forward to future developments to our role in future terms and years.