It was an overcast morning at Southfields Academy as we entered. I was good to have Victoria back from her travels and Athelia was committed enough to come out to the school even though she was suffering from a flu. 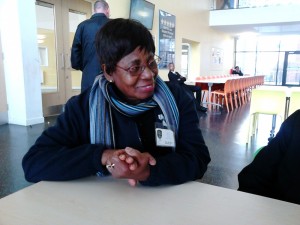 The three of us engaged in conversations with different groups of students, some of our old favourites and a few new ones also.

As we went into the Academy to see the excluded students we had our work cut out. There were seven students in all many of which being in a place we were only three there was a limited time we could spend with each student.

However we did manage to see them all in the allotted time. Many of which were excluded for being too talkative in lessons so we could encourage them to save the conversations for the break time. There was one young boy who had got into a fight on the bus while going home last Thursday after a fellow student called him names and insulted his parents. He asked us what we would do in this situation. We advised him as to how to identify when he is been deliberately provoked and to know when someone was trying to get a certain response from him. He accepted our answer.

It was refreshing to see that we were not seeing the same faces in this time which the Academy calls the satellite. It gives us some confidence that our advice does not go unheeded and hopefully is helping some of the students make the best of their education.

We look forward to our week break as we are not in the school on the bank holiday and will resume in the Academy on the 9th of May.