The academy was in a quiet mode due to the early morning rain and the fact that most of the students were in the middle of their exam season. This made so 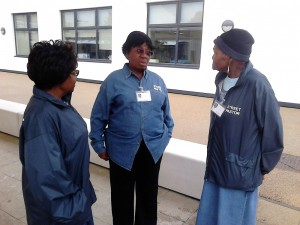 me conversations a little difficult as students were slow to communicate but there were some who were willing.

Wayne spoke to some students who were keen to show off their basketball skills. This could be a lead to positive friendships in the future. Athelia was speaking to some Asian student s who were new to the school. Because they were so new they were exempt from taking exams so had more time to communicate.

As we moved into the Satellite group we were surprised to see that there were so many students in this group.  We had almost twice as many as we had seen in previous occasions. Many of which had been excluded for being disruptive in the classroom (or so they said). Many of which were in satellite for a minimal number of times so we encouraged them to be careful in class and to focus.

Doing the satellite has put us on friendly terms with many students whom we would not have had a chance to communicate with. This is something we had hoped for and we see as something positive from our work.

Young student “D” was in a positive mood and seemed a lot more cheerful that he was before but spoke to Victoria in a disturbing way for a young man which caused us to raise concerns about his.

There were other we spoke to who just seemed totally disinterested in us and our efforts but we felt positive about the work and trust that the advice that we give will register in the minds of the young people we speak to.