The team were out in full strength despite a deluge of rain this morning. The Students were not keen to venture out into the playground in great number and the basketball courts and playing fields were empty but we were all still on hand to e 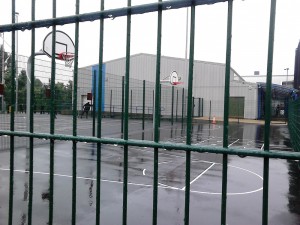 ncourage the students that we spoke to in their studies.

As we move into the satellite we were told that the numbers in this group were small but we had almost twice as many as anticipated. The young man ‘D’ who we had mentioned before was in a better mood despite his difficulties which was encouraging to see. There were some old faces and some new ones Victoria and Atheila spoke to some new faces and gave them some sound life experience advice as to how to conduct themselves in class. Veronica had a young lady who we had seen before who had issues in her classroom

The day did not end there for Athelia and Victoria as the will attend a meeting to follow up on the peer mediation training which they received earlier in the year.

It was a rewarding day with great commitment shown by the team despite the bad weather.