We could see the academic year was beginning to wind down as we began our patrol in the school. It was cloudy and overcast as we started but there was bright sunshine as we ended our session in the playground. 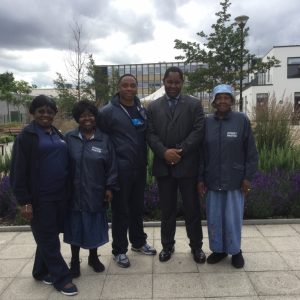 Victoria Atheila and Veronica were keen to get in to conversations with students who shared about their aims and ambitions. Wayne had a game of basketball with a student who he had spoken to two weeks ago. The gam was very one sided but a good way to make a friend of a fine young student who may well play at basketball at the highest level one day.

As we went into the school to talk to students in the satellite we had one student who outwardly looked like a tough case but was a very reasonable young man. He spoke of the bad reputation that he had acquired in previous years and how this reputation still plagues him. We encouraged him to work hard in changing this perception of himself and how it is easy to get a bad reputation and harder to earn a good one. He was encouraged by our talk and we hope to see him out in the playground out of satellite in the last weeks of term as we continue to see on a regular basis nowadays.

We spoke to Mr Davis who spoke of the utilisation of our peer mediation training in the coming academic year.

We are pleased with the role we play in the school and are pleased that the role is growing and evolving into something even better as we grow in our relationship with the academy.