Athelia, Victoria and Wayne were back I Southfields Academ 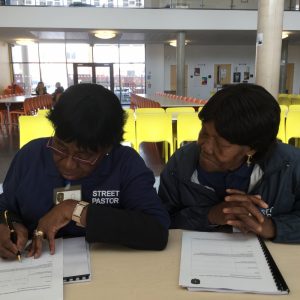 y for the first full week of the new term. Our job was made easier by the fact that the Academy had introduced a system of a different colour tie for the different age groups. This is a great help to us as we can easily identify the new students in year 7.We will need to work closely with this group as they are not aware of us and our work.

Before we began we learned that the success rate in the schools exams and how this beats a number of other schools in the borough, We were recognised for our role in this as we recalled the good advice we gave to the exam takers in the weeks leading up to their exams.

As we spoke we made new friends and met a few old ones we noticed that some of the students were not happy to be studying Spanish. We thought not a great deal of it but it come to relevance later.

We spoke with Larry Davis who gave us a run through the schools safeguarding policy which was very helpful to us in our role in the Satellite. The main ethos of the message was to report anything that may fall in the realm of breaching the overall safety of the child.

Victoria mentioned the expression of dissatisfaction from the students studying Spanish that we had heard in the playground which turned out to be due to the fact that the new Spanish teacher was finding her feet in the school and may need some more support. Mr Davis was glad that we raised the issue and will look into it.

It is already shaping up to be a busy year and our role continues to develop in a very positive way. It was good to be back.