Travelling to and from the Academy was tricky this morning due to problems with the transport system but this did not deter us in our work.

As we went into the playground we found that there i 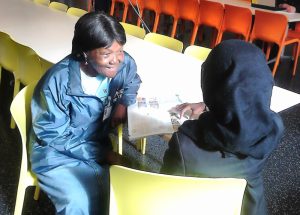 s a growing core of students keen to approach us even if it was just to say hello. Due to the fact that we now speak to the students in the satellite means that we now know a number of students on a one to one basis.

Victoria was keen to pick up on a conversation she had last week speaking with a girl from Ghana who she says spoke continuously. On this occasion she had to call in help from Athelia. Athelia herself spoke to a young Muslim girl who was being teased for wearing her Hijab (head scarf). Athelia advised her to speak to her teachers about the matter.

Wayne was keen to explore the playground and see where there students spend their time. There was a lot of talent on display on the table tennis table and there were many students who had been engaged before who came and said hello.

As we moved into the satellite we found a number of students. Only one whom we had previously met. There were similar issues that we had encountered before and we encouraged them all to concentrate on their studies and all were receptive of our message. There was w

One young man who told us of a student who we had spoken to before in satellite. This student has now been excluded from the school. We were saddened by the news and asked the student who gave us the news to pass on our greetings.

We now have a break for a week due to the half term. When we return we will be losing Victoria from the team but we hope that Veronica will return from her prescribed rest to bring her unmistaken energy to the team.