It was a sunny morning when we entered the academy. Athelia and Wayne were the only Street Pastors present as Victoria 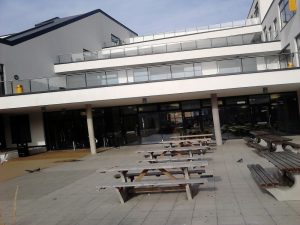 had left for a holiday and Veronica is still resting by order of her Doctor.

Veronica also informed us that she has to undergo a minor operation so probably will not be able to join us until 2017.

As we entered the school it was a day like any other. We met with old friends who were keen to exchange with us. The students were keen to joke with us and to share their ambitions as usual, Athelia shared with a group of Hispanic students. There was a Brazilian sister and brother who spoke very little English. We encouraged them as best as we could that they would be speaking good English in the next few months.

As we shared in the satellite there were only two students present. There was a young man who did not want to speak but broke down in tears when we spoke to him speaking of his desire to change schools. There was little we could share but to try to encourage him. Athelia spoke to a young lady who did not know why she was in satellite. We could not spend long because we had to attend a funeral of a dear friend of us both so our visit was a very brief one.