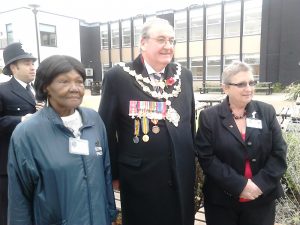 We joined with students and teachers from the school, The Mayor of Wandsworth y for the second time this week to mark their Remembrance Day service. The local army Volunteers and Reverend Ian Tattum of St Barnabus Church in Southfields to mark this occasion.

We learned that the youngest volunteer to die in the war was a local lad who was only 12 years and 5 months old when he signed up and lost his life in one of the most violent battles in the war. We also recognised that fact that the Academy lost one of its own students in Afghanistan recently and a reef was placed by the memorial in the Academy’s front reception.

It is always a great occasion to share with the Academy and a good chance to recognise the sacrifice others have made for our freedom. We look forward to many more occasions of building bridges in the Academy and to contribute it’s success.