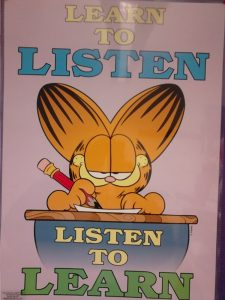 It was an overcast and drizzly morning as we entered the Academy. We had a late start due to oversleeping and an accident on the road in Central Wandsworth so we were a little late entering the Academy but we wasted no time in getting down to work. The Students were a little shy at first but soon got into conversation with us. Atelia and Wayne were speaking to a number of Spanish Students who were getting to grips with the English language. We saw many old friends who were keen to greet us also.

After our early morning visit last Thursday as part of the schools Remembrance Day we were surprised to see our pictures on the schools newsletter alongside the other dignitaries and Academy staff. It was great to see our contribution marked in this way.

In the Satellite we had a large number of year 7 students. The teacher who heads up the Satellite told us that the majority of students at this time of year would be the younger ones as the older students tend to get more serious about their studies. All but one of the candidates were from year seven and all were keen to talk. We shared with them something of our work as street pastors and tried to encourage them to focus on their studies and not to get into trouble.

All in all it was another rewarding morning as we head towards the Christmas break.