It was a beautif 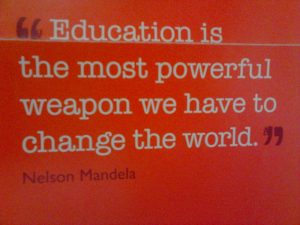 ul bright blue sky morning but there was a chill in the air as we had into winter. Atheila and Wayne were in the Academy and got down to work straight away talking to the students. Athelia got stuck in with some Student from Thailand who were new to the school. The students were on the whole a little shy but some were willing to speak. Wayne met an old friend he had made an acquaintance with on one Monday morning. This young man was on the verge of exclusion and was on report. He told Wayne how he was off report and was improving in his lessons. It was a joy to learn that our efforts were playing a role in some students focusing on their work and improving their behaviour.

As we moved into the satellite it became clear to us that there was an attitude amongst some students that they were not being careful in the way that they communicated with the teachers. The Academy seems to be clamping down on this and we found a number of students in Satellite for this reason. It was very much a case of advising them to focus on their studies and to watch the banter with their friends in lessons.

It was a real pleasure for us before we left the Academy to be stopped by the head of the catering department who has been observing us when he said it was a good work that we were doing with the students. He spoke of his wish to see this kind of work in his home country. It was good to see that our work has not gone unnoticed even by those who have little to do with our work.

The work always presents challenges and can seem that be fruitless at times but the student who was now off report and the catering head reminded us that our labours were not in vain.