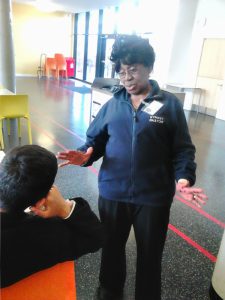 rike. Victoria heroically struggled in and represented the team. She spoke to three young men. Between them, they wore badges for the Southfields Academy Book Club; 95 per cent presence and punctuality in school; Science Leader; English Leader; and Maths Leader.  They engaged Victoria the whole time, and were eager and happy to discuss variously with her.  She reminded them what it means to wear such badges which they had worked very hard to achieve; also they should continue to be “silent” mentors to other students through their words, deeds and actions.

She also saw Mr Davis, who told me about his journey to school this morning; while I told him mine, adding that both Wayne’s and Athelia’s might have been even more difficult.  He has some news to share with the team.

Some of the canteen staff asked for other members of the SPs.