It was the first time in Six months that we were able to meet as a Street Pastors team to patrol Tooting and the team were full of enthusiasm to get out onto the streets despite the bitter cold. 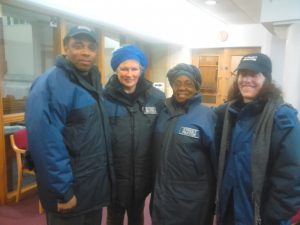 Victoria, Rez Felicity and Wayne were patrolling that evening and we arrived in Tooting a little after 9pm. We were met by Michael who himself was a Street Pastor in Merton who was pleased to see us and said he was not aware that there was a patrol in the area and we explained our difficulties and of our optimism for the future.

The team spent some time in the local McDonalds as this was observed as an area of conflict in the past. We were surprised to find the location very peaceful and after conferring with the Security we found that the young people who had caused the offence in the past had now been detained by the police. It was good to see our old friend Endurance who worked in the McDonalds as security who was pleased to see us and report to us his findings.

Because of the cold many of the residents were not hanging around on the streets but were keen just to get home and keep warm. We met Ben at one of the local night spots who again was a member of security staff. He reported that he has seen very little unsociable behaviour but certain isolated incidents such as bag snatching and someone being hit.