It was cold and raining heavily as Victoria and Wayne entered the Academy five minutes before the morning break started. 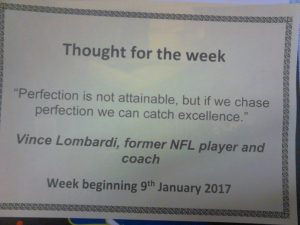 The students were in muted mood almost as though they had forgotten us. But we saw some familiar faces who were pleased to see us. Vitoria and Wayne spoke to one young lady who was pleased to converse with us though her friends were not too keen.

The adverse weather meant we were not too keen to spend too much time in the playground as were most of the students so we moved indoors. Wayne met his old friend ‘D’ whom he met in Satellite at the beginning of last term who despite improving in his class work and behaviour was finding maths a struggle. It reminded Wayne of his own school day when maths became much more serious when one reaches the age of 13-14. We tried to encourage him as much as we could.

In satellite there was only one young lady who we had seen before. Apparently she had missed a detention so had to do Satellite instead. She was in good spirits so we encouraged her to buckle down and she was responsive.

It was a bit of a slow start but in our work in the schools we do alot of relationship building and it seems that we may have to spend time doing this again. Nonetheless we will be diligent in our work and hope for better conversation in the future. All in all it was a good morning.