It was cold and very foggy morning as Victoria, Athelia and Wayne entered the Academy. After a quick cup of coffee we set to work. The students were somewhat muted but much more open that last week. Many of our old friends were keen to meet and greet us. It almost feel as though we need to build relationships every term but maybe the students were this way because if the cold. 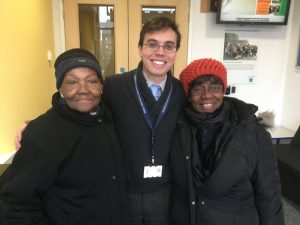 no overcoat as he sat alone so we approached him. He said that he had left his overcoat inside but we were not convinced. As he shivered away we felt there was more to this issue than meets the eye. He had not long been at the school or had he been in the country very long and we wondered if he owned an overcoat. The schools social worker took up the case.

As we moved into the satellite we found four new faces and one old face. Many of the offences were slight such as speaking back to the teachers. We encouraged them all to be careful how they speak to teachers and all were receptive to us.

All in all we found we had another productive morning and were very encouraged by the fact  the students were more receptive to us.