The team were a bit subdued this morning as both Wayne and Athelia were suffering with the flu. We arrived with Victoria o 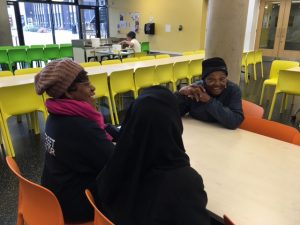 n a cold and overcast morning and immediately came across a young lady who wanted to speak to Mr Davis. As he was busy Athelia and Victoria spoke to her and helped to resolve her issue. She was having trouble understanding the teacher as English was her second language and she was used to hearing English in a Scottish accent.

The Ladies encouraged her not to be shy and to speak up about her problem or else she would find herself falling further behind in her subjects.

In Satellite we saw tow familiar faces who were both disillusioned with school with little idea why they were in Satellite. It was sad to see the same faces again but we spoke to them and encouraged them in their studies as best we could.

We felt it was another positive morning despite the subdued nature of the day with a lot of positive interactions.