It was a very miserable rainy morning as we entered t 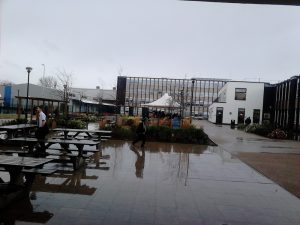 he Academy, The rain was coming down very hard as we were about to begin our work but we soldiered on all the same. Our conversations were restricted but rewarding.

We had noticed for a few weeks that there are a number of Students who have bold hair who dye the ends of their hair sky blue. It seems to be a growing trend in the school so we enquired as to the reason. There was not a very good reason from the students but it was a trend that had grown among some students.

As the playground was quiet we focussed on the students in satellite. There were three on this occasion. One young lady who we had not seen before, a young man who we had seen last week still being punished for an offence that has kept him out of lessons for three weeks and our old friend ‘D’ who has been kept separate from the main academy.

The young lady had a problem with punctuality; Victoria spoke to her and broke down her initial resistance. After which she was open to receive the advice that Victoria had for her.

Athelia spoke to a young man who we saw last week who got himself in trouble for an incident that happened outside the school between him and another student. He had learned his lesson and Athelia was on hand to insure that he understood the error he had made.

Our old friend ‘D’ we had learned had been taken out of the schools special unit for excluded children and returned to the normal school but was still a distraction. When Wayne spoke to him he was not very receptive but he did let us know that his mother was in better health and we sent our regards. Wayne advised him that despite what life throws at him life is what you make of it and that he was to make the best of life despite of all that he had been through.

Last week I wrote of a tension between Athelia and Victoria. There is still a tension but time is a healer and I am confident that these tensions will dissipate in the coming weeks.