Victoria, David and Wayne met on a very mild evening to patrol in Balham and Tooting.

We had received word that there was a very viole 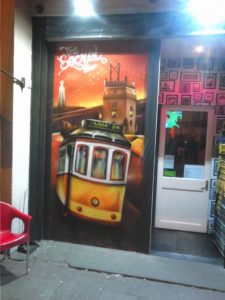 nt sexual attack on an elderly lady in The Balham area so we went to the reported location to pray. We were surprised that the location was a very open location with a large block of flats overlooking the scene. We prayed for the victim, the perpetrator of the crime, the local community and for the local church in the area.

As we moved on to Tooting Broadway we found that the market place was a vibrant location of small restaurants and bars that we had not noticed before. We took a tour through and found it was a very tranquil place with people casually enjoying the evening. We could see that this location will be very popular as the weather improves throughout the year.

As we moved further into Tooting Broadway we found the elderly couple who were sat on the bench outside the Library. They were a little more talkative but still not receptive to offers of help. They were prepared to engage with us and even shared a joke. We were aware that many have offered help but they seemed quite happy to stay where they were.

As we moved on we met Ben who worked as a doorman at one of the bars named Ben. He spoke of how quiet it was but that there had been incidents of gangs of moped riders snatching bags in the area. We made a mental note of this and kept our eyes open.

As we moved into the local McDonalds in Tooting we noticed that there was a very weak security presence and it was a lot calmer than we had seen it in previous months. We met our old friend Endurance but he seemed otherwise engaged and had little time to speak to us.

As we spoke to the staff on the doors of the Graveny Meadows they told us it was unusually quiet for a Friday that evening but things may get busy later.

We approached the Tube station and found a broken bottle of Champagne that we decided to clear up as we did Victoria was approached by Evelyn who worked studied at the St Georges Hospital University. She was enamoured by our work and mentioned she had seen a similar work in her home community. She also mentioned to us that the elderly couple outside the library had been there for at least two years.

As we approached the end of our patrol we noticed a young man named Nathan outside the local Moon Under the Water pub. He approached us and asked about our work. Though he felt that he had not maintained his Catholic faith since his youth he was keen to discuss how he could be involved in such a work. We gave him some contact details and hope he will be in contact.

We were all very tired before the patrol began and had struggled to maintain the patrol but despite the quiet we felt it was a great evening to be out.

Bottles Collected= 2 including the broken one.