Despite the fact that it was Good Friday and we had all had busy days the team met at 8pm to start the Patrol at 9pm. 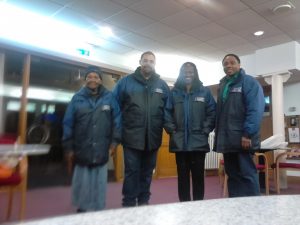 As we did last month we went to the market place and took a walk through. As we observed last time there were many nice quiet out of the way places to eat and drink and everything seemed very peaceable. It was great to see people enjoying themselves peaceably and we were surprised to learn that the market had been open in this way for the last two years.

As we moved on we saw a group of young men who were a bit confused of our identity and thought of us as police and soon left us. This conversation though brief was significant because when we passed Tooting Library we saw the usual homeless couple who were not keen to engage with us at all. However there were another couple on the other bench outside of the Library. Jonny and katana had been living at the back of Sainsbury’s car park. Jonny was a born again Christian who had strayed from his faith but still believed. They had recently been informed that they was to be housed in Tottenham Hale and had to view the place in the next 5 days. We had a conversation with them and wished him well or the new place to live. They said they were appreciative of the time we had spent with them and we shared prayers with them.

As we moved on we noticed that the area was calm as though people were treating the bank holiday as a time for rest.

As we did last month we met Ben who worked on the door of a night club. He told us how peaceful it was and how he had seen very little trouble, he said it was good to see us again and said how good it was that we were becoming more consistent with our patrols.

We also met a young man named Migel who spoke of how young people were very different from  his day, We encouraged him to speak up about the things he saw on the streets and he commended us for our work.

Acting on what Jonny and Katana had told us we decided to pay a visit to the car park at the back of Sainsbury’s. We found some groups of young people there and engaged with them for a time.

Despite our inconsistency in the past and the fact that Tooting has become quiet, we felt that our engagements were fruitful and helped our resolve to commit to patrolling Tooting in the future.