It was an overcast day as we entered the academy. It looked as though there was going to be sunshine but 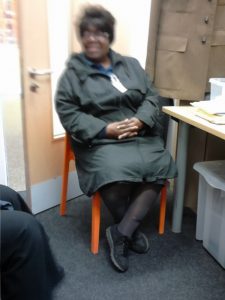 the clouds appeared almost as soon as we arrived. Veronica, Victoria, Athelia and Wayne were present today. David who was present with us before the half term break had a work assignment.

We got to work and Veronica and Athelia were busy speaking to students who were in a cheerful mood after the holiday break. Victoria and Wayne found two students who had issues with the academy. The Students spoke to us before the half term break but on this occasion we managed to get them before Mr Davis who Wayne had submitted a report about this case last term. Although the young men were at first reluctant to speak at first they soon agreed to write a report of all of the incidents they had witnessed.

As we moved into the Satellite we found five young people who we needed to speak to. Three of which we had seen on before and two new faces. We feel that the students were move focussed now as exams were around the corner but our work today was important and in keeping with the schools policy on zero tolerance to bullying.