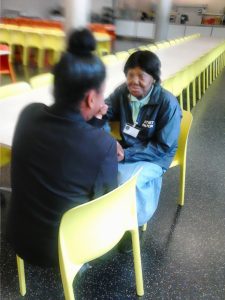 d over the past few days. The Fire in the Ladbroke Grove area and the Terrorist attack at Finsbury Park Mosque were on the minds of the team and the Academy who observed a minutes silence for both.

Despite the high temperatures there were not many in the playground today as the year 11’s upwards were either finishing exams or had finished.

Athelia, Veronica and Wayne were busy talking to the students and advising them concerning their schoolwork.

Wayne caught up with two students who were due to write a report to be handed in to Mr Davis but they were side-tracked by recent sporting events. They promised to have the report ready for next week.

The Academy also approached us about speaking to a young lady who is in need of some one-to-one counselling. They had mentioned this last week but the young lady was not available today.

As we moved into Satellite we met one familiar face and three new ones. All of the candidates were there for too many negatives but needed a few words to help them to come up to speed. There was young lady who seemed disinterested or distracted with life and could not really engage with us. We could all but try but one can lead a horse to water but you can’t make it drink.

It was a fairly rewarding day but we look forward to the following weeks where we can find resolve for ongoing issues and work effectively for the benefit of the students.