There were only three of us this morning. Athelia, V 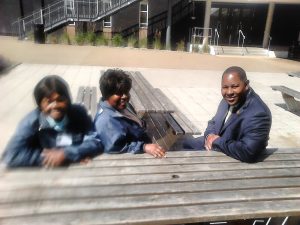 eronica and Wayne were out this morning and it was a very hot and sunny one too. It looked initially that it would not be so glorious but it was.

We met with Mr Davis as we entered the school and were quick to remind him of the young lady who he had mentioned to us last week.

She is a young lady who we shall call “T” She had been excluded from the school and put into the schools exclusion unit for the last three months. She seemed somewhat disinterested in everything around her by her body language but as we spoke to her she began to open up to us and talked about her aspirations.

We hope to have further talks with “T” and will keep a close eye on her over the coming weeks to the end of the term and into the new academic year in September.

We had little time to spend in the playground and we were unable to find the two friends who were due to write their report for Mr Davis as we could not find them.

As we moved into Satellite there were a number who had just had too many negative reports throughout the week and a few who had been involved in a water fight during the previous break time.

It was a case of just encouraging good behaviour as we always do.

It was good to be in a position with the school that we can be invited to take part in the student’s welfare in such a way and we are thankful for the opportunity.