There was a different feel in the Academy today as most of the children wore casual clothes and not their uniform. This was because of an initiative to encourage th 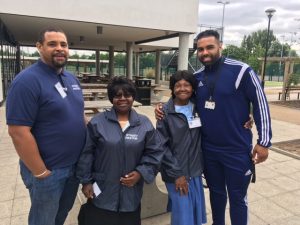 e children to donate a pound each to the victims of the Grenfell Tower disaster. There were less students in the school due to the fact that the year 11’s upwards have now finished their exams. We began our work and Athelia got stuck in to conversing to the students. David and Wayne went in pursuit of the two young men who promised us their written report but were unsuccessful in finding them. After the break we made efforts to contact the young lady “T” that we spoke to last week. Unfortunately we were unable to speak to her because she was pre engaged in the school exclusion centre.

The Satellite in the school was very quiet this week with only two candidates who we managed to speak.to. Despite the quiet nature of the day we did meet a number of students who we had met in previous weeks in Satellite who were all pleased to be out and were willing to greet us.

Though our involvement in the school was minimal this week it was good to see how the work has progressed as we can meter the response of the Academy to our work as the years have progressed.

Veronica joined us later as the break time finished but was in time for the team photo with one of the senior teachers.