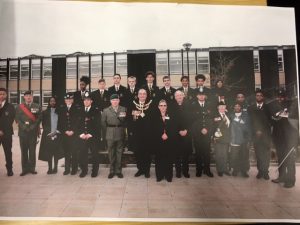 iddle of their exam time. Some had sat exams that morning and others were sitting exams later that day.

Wayne managed to catch up with the two students who were due to submit the report which was to hand to Mr Davis but unfortunately the students were not in a position to finish it. Exam pressure and recent events meant that they were unable to. As we had only one week left t was left with them to produce a report in the new academic year. It was sad that we were not able to resolve this issue by the end to term but we do not consider this work to be over.

We tried to meet with the young lady we met with two weeks ago (“T”) but she was unwilling to speak to us today. The school took this as a positive sign as she is now maybe in a better position than she was and no longer needs our support. We will watch developments in the new academic year.

Satellite was busy for the end of the year with many new faces. The school has a policy of punishing students at this time and taking away certain privileges to keep the student on their toes at the end of the year so that they can carry this memory into the new academic year.

All in all it was a good day and we soldier on for the final week and a well-deserved rest.

We were left a little present of a picture of a Remembrance service parade which we took part in last November so we present this as our accompanying picture.