There were three of us out on patrol. Rez Felicity and Wayne made up a team of three as we hit the streets at just after 10pm.

Our patrol started in Tooting Market. We have made a tr 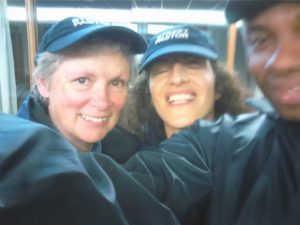 end of taking a walk through this market place which turns into Bistro’s and small bars in the evening. It is amazing to see the transformation that this area has made and it had become even more popular that we had seen it in previous months. We found that we had to squeeze through certain parts of the market as it was so full.

As we got into Tooting Broadway itself it was a little more quiet than usual. We went up and down Mitcham Lane and met some of the people we usually met, They were all glad to see us and we are building good rapport with some of the homeless we have met before.

We met some new bouncers on some of the doors we had stopped at before who were all interested in our work and we had good conversations with them. We also met a homeless gentleman who was keen to get back into shelter. We were able to link him to Street Link so that he could have shelter for the following day.

We entered the local McDonalds and met new door staff there. One member took our number and said he would mention us to a homeless man who he sees regularly. We were not able to meet him but the doorman did call after we had gone. Wayne followed up the call the following day to hear that the homeless man was not keen to receive help but it was important to follow up and show that we are people of integrity and are prepared to do as we say.

All in all it was a good evening and we were all pleased to be out.