It was an overcast but warm day as we entered the Academy. Victoria, Athelia and Wayne were active in the academy. Athelia was keen to crack on with the work as we arrived and was soon speaking to students despite the fact that she was struggling with the after effects of having 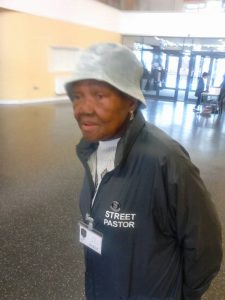 recently had the flu vaccination. Both Victoria and Athelia were very active in the playground. Victoria said that she spoke until she felt horse in her throat.

Wayne caught up with some old friend and managed to see the two students who reported the incidents of bullying last academic year. They were keen to report that there had been no more-occurrence of these events. They were even happy to report that the food had improved in the Academy with more healthy options on offer. They reported that they were altogether happier and happy to be at the academy.

As we moved into the Satellite we found five students mainly from the older sect. We were a little surprised to see this as we seldom ever see this age group in the satellite. Most of the offences were for lateness.

It was a good day to be in the academy and we can clearly see that there is a marked difference with our relationship with the students form when we started to even this time last year.

We look forward to events in the academy coming up in the next few months where we can establish stronger relations with more of the students.