The weather improved as we entered the Academy, it was overcast and rainy looking but it soon brightened up into what was a very untypical October day. 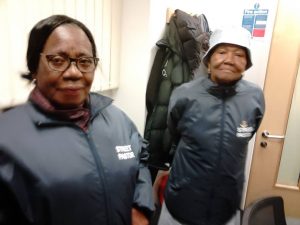 present on Thursday in the Academy to help with the Harvest Service that the Academy has on an annual basis but lateness and heavy morning traffic meant that we could not play a fully active part as we have in the past.

Today as we entered the Academy they were having an open day so there were a number of Students and young prospected pupils around with a view to starting next September.

As we started our work we got on having conversations with the students. Some were keen to speak to us and to share their problems. We were able to advise them as best as we could.

As we moved into the satellite there were a few familiar faces and some new ones. The Academies policy of punishing relatively minor offenses with satellite seems to be working as the majority of people are not repeat offenders. Those we do speak to are in a position where they can heed our advice and move on and put things right. Often these individuals become our friends and are keen to greet us in the playground.

We are pleased with the way the work has developed and we hope to expand the work in the future.