It seemed at first that there would be just three of us but our numbers grew to five by the time we were ready to go to Tooting Broadway. 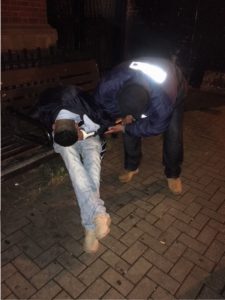 ok a brief stroll around Balham. Balham was very quiet so we quickly went on to Tooting.

It was Adams. First outing as a Street Pastor and it was great to have him with us as he was due to be up early for the following morning to undergo the next phase of his Street Pastor Training.

We took our walk through Tooting Market and then went on to Mitcham road. As we passed the Library we saw a young man who was sitting on the bench, bent forward and unconscious. We tried to rouse him but with little to no response. As a team we decided to call an ambulance for him.

When the Ambulance arrived the young man we treated for substance abuse as the Paramedic deduced that he may have taken heroine or Fentinol. A friend who was passing by informed us that the young man was homeless and that he had been drinking earlier that day. We stayed and assisted the Paramedic for the best part of the evening until he was taken to hospital for further treatment.

This incident could not have come at a more potent time for David, Victoria and Wayne as we had attended refresher course training to aid us to deal with incidents like this. It was a honour to be involved in what could have been a potentially life threatening situation.