It was a cold but sunny day as Wayne entered the Academy. He was alone for the first half of the visit due to unforeseen circumstances.

As Wayne spoke to the students there was a very positive 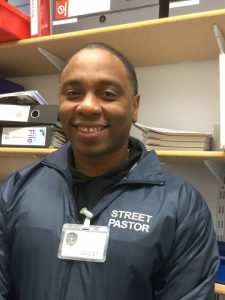 feeling in the Academy. There were the two gentlemen who complained last academic year who said that this year they were having a very positive experience. One young man said that he felt that his learning experience has improved dramatically.

There was the young man who we approached last year who had no coat on a cold day who was busy doing some of his own personal work. It was good to see him integrated into the school and seeming very comfortable to do his own thing.

There were some new students from Eritrea who spoke of the fact that they were enjoying their time in the Academy, It was great to see how many new overseas students come into the academy and do so well.

There were also some young men from the football Academy who also spoke of their positive learning experience. They were happy to talk and thankful.

I relayed the positive experience to Mr Davis who spoke of a recent inspection on the Academy from OFSTED who gave them positive reviews.

In the Satellite there were only two students. By this time Victoria arrived so we presented ourselves to the students and cancelled them as best we could.

It was a very positive day and good to have such an upbeat experience on our return after half term.