It was a little warmer for us today and very bright and sunny as we entered the Academy. We were a little b 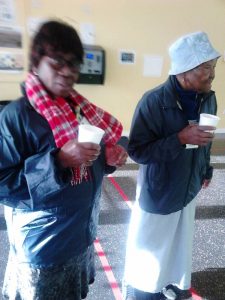 it late so we got straight down to work as soon as we arrived. Athelia and Wayne were unable to attend the Academy’s Annual Christmas Concert but Victoria was present and said that the music and the singing was first class. We managed to meet with some of the student musicians and tell them of their performances.

We met with a number of old friends and two of the young boys who had problems a few weeks back and were pleased to find that their problems.

There were other old friends we caught up with and we made the best of our limited time.

The Satellite had alot students, more that we could get around. We did our best to see as many as possible. There was a lot of frustration on the behalf of the students and we encouraged them to focus on making a new beginning in the New Year.

Speaking to some of the teachers it was clear that there was an issue with parent support in the Academy, Victoria observed that there were few parents present at the Concert last Tuesday and this was an issue that the Teachers had picked up on.

It was good to be in the Academy and the Catering Staff were keen to commend us on our work.  It was good to hear their comments which were all positive.

We now have a two week break for the Christmas and are looking forward to the new term next year.