It was a cold January evening as Rez, Katy Cynthia and Wayne Met for their first night patrol of 2018. We e 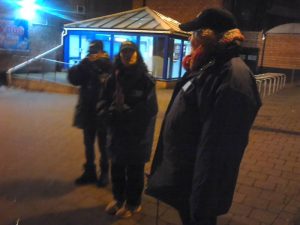 xpected it to be a quiet one as people tend to be recovering from the Christmas and new year’s activities at this time.

As we got to Tooting it seemed that we were right. The market that turns into little independent eating places and small bars were not as busy as we once had observed. We did however have a long conversation with a man who was a member of a group called the Guardian Angels. We had been approached by them before and we were a little cautious of their objectives. However we exchanged details and will do research into the organisation to see if there are ways if we can collaborate, He explained that his organisation had worked with Street Pastors in America so we will see what comes of our research.

As we moved on we found that the high street was also quiet and conversations were slow until we found a young man named Ryan who told us of his admiration for our work and his apprehension about the future in terms of the crime and the racism that he had experienced. This was obviously triggered by an experience earlier that day but we were able to encourage him by sharing what we were doing and our ethos and he left us saying he was encouraged by our meeting.

As we moved on we were approached by one of the door staff at one of the local night spots. They raised issues of delivery mopeds which were parked in an alley way and were causing concern the way that they were riding in a pedestrianised area. We spoke to the management of an organisation nearby that these delivery men delivered for and they said that they would speak to them about this issue.

As we walked Katy observed that there were a number of stickers advertising a Massage Service and all were in the same handwriting but listed four different mobile numbers. They were scattered on different locations on Telephone booths and lampposts. We felt that this may have been the result of a human trafficking gang operating in the area and sought to take down all of the stickers that we found.

Though it was visibly quieter than usual it was a good evening for us and we felt that we had done w worthwhile work which we trust will grow in the future.