A team of three met to Patrol Central Wandsworth on Friday. Cynthia Katy and Wayne Set out at an earlier time of 6pm. We were advised that there was activity on the streets earlier that evening as opposed to a later patrol 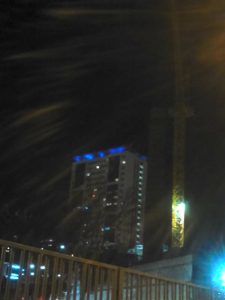 The three of us set out as we saw most people on their way home from work. We knew that there was some activity with some homeless people in the graveyard area near Southside so we walked through it. It was very quiet but we did meet a lady who was concerned about people walking and kerbing their dogs in the area. We observed that there was inadequate lighting in the area as there were at least three Street Lights not working. Katy said she would mention this to the council, there was a sign saying that one should not walk their dogs there but it was not very visible.

As we moved on we met a few people who were recognised by the team, there was one homeless man begging by Wandsworth Town Train station who we knew was not homeless.

As we passed through the underpass we noticed that there had been a clean-up in the area. We were aware that that underpass was a very dangerous area in years gone by. It was evident that there has been a clean up to try and re-gentrify the area with all of the construction that is taking place in the area. The skyline of Central Wandsworth looks more like Central London nowadays with all of the cranes and new buildings being built.

Wayne took the team to a location nearby called the Sun Pub which was near Wandsworth Bridge. The pub was quiet at this time of year but in the summer gets very full because of their beer garden and their riverfront view. The door staff were keen to share with us but reported very little trouble but they felt that anything could happen at any time.

As we went back towards the Train Station we saw a group of polish gentlemen drinking by some nearby benches so we approached them and spoke for a while. They felt that we were going to preach to them but we had a nice conversation. They were celebrating a friend’s birthday with a few shots of polish vodka. We declined to offer to share with them but it was interesting to observe that they were drinking on a wall side near a public bench with a number of pubs and bars nearby. They claimed that it was because the pubs and bars were too expensive. This again was evidence that there was a definite effort to move the area upmarket.

Though it was relatively quiet we felt it was a fruitful evening and as a team we felt it was good to be out. It may take time to find out how we may best serve this area but we will stick to our convictions and continue to go out in the area.