The weather was much more amiable this week than last week as Athelia and Wayne entered the academy.

We set to work from the outset making fr 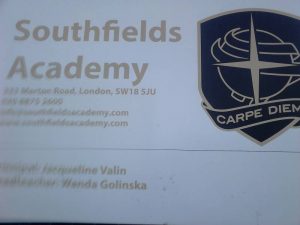 iends and catching up with some old faces. There were a number of students who came to seek us out to let us know how they were getting on. This is in stark contrast to where we were when we entered the Academy. After reflecting on this with Mr Davis we set to work meeting with a number of students who are now re-focused and achieving in the school. There are still a few cases which we need to monitor carefully but it is good to see that so many of the Academies problem students have managed to get back on track.

As we went into Satellite we saw a few familiar faces but a lot of new ones. There were a number of cases where students had got into fights which surprised us. A number of them said they were encouraged by friends to get into trouble and the friend was not in Satellite and they were. We did what we could to encourage them all to focus.

It was a nice morning and it was good to reflect on where we came from to where we are. We feel very much a part of the Fabric of the Academy and feel privileged to be a part of the success story.