A team of three met at 5:30pm to patrol the streets of Central Wandsworth. Ka 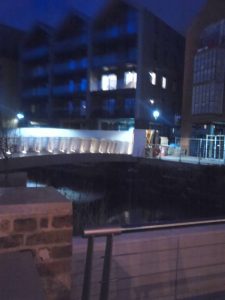 ty, Cynthia and Wayne were out on the Streets still asking questions about area and looking as to where is best to implement our work.

It is clear to see from the area that Central Wandsworth that there is so much development happening that will change the whole demographic of the area. The former Ram Street Brewery which closed about 5 years ago. It is now being converted into a set of Luxury flats with an area to sit and drink along the River Wandle. It was interesting to see the plans for this development and to foresee the issues that may come along with such a development. It was good to be proactive thinkers about this situation and not reactive to the issues.

As we moved around the area we found that things were pretty steady and the area was very quiet. it made us ask questions as to where we are best deployed within the Wandsworth Borough. We think that maybe for next month’s patrol that we look to another nearby area of Wandsworth, maybe to Battersea some 2.5 miles away. We had given thought to this before we feel as a team that we do not want to give up on Central Wandsworth but for now we will look towards nearby Battersea to implement our ministry at least for next month. There is a network of Churches in the area who are committed to prayer for the area and we hope to make strong links with them in order to explore the needs of the area and where we need to concentrate on next.

Though it was a quiet night it was good to be a Christian presence on the streets and to observe the potential changes.