We were back to full strength once again as Victoria, Veronica, Athelia and Wayne enter 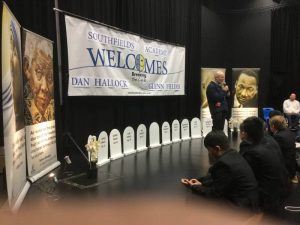 ed the Academy on a bitterly cold March day.

We met our two friends who we mentioned in our last two reports who had a chat with us about life and how they were getting on. They had some sad news for us, their colleague who they brought to us had run away from home and now the Social Services were involved in his case.

We felt that this case was one in which we could exercise very little influence as it was beyond our control and remit but pledged that we would help in any way we could.

As we moved around the playground we struggled in the cold but spoke to a number of old friends among the students.

The surprise of the day came after the break when Mr Davis invited us into one of the drama studios to witness a presentation. A group called ’Breaking the Cycle’. They did a presentation on the subject of forgiveness. They spoke from personal testimony of their own experience of the personal detriment of carrying resentment against an individual both mentally and physically and how the power of forgiveness can liberate.

It was great to hear from them and to share with them about our work and the values that we had in common. We were very thankful to Mr Davis for this experience and it was great to see so many students interacting with this group asking questions and taking a genuine interest the activity of the day.

Despite the sad news about our interactions over the last few weeks it was a very rewarding day. We will be keeping a close eye on the situation with the gentleman we encountered a few weeks ago and help in any way we can.